The Sunshine Water Control District was established on July 10, 1963 by Ch. 63-609, Laws of Florida under the authority of Chapter 298, Florida Statutes, to provide surface water management improvements and services to support the development of this portion of Broward County which was eventually incorporated and became central Coral Springs. The District has 5,422 acres of canals and right-of-way property providing drainage and flood protection to 17,000 landowners in the central core of Coral Springs. As shown on the District Map, Sunshine’s northern boundary is along Wiles Road. The west border of the District is the Sawgrass Expressway along the L-36 Canal. The southern boundary of the District is Canal Z which is located on the south side of Royal Palm Blvd. Sunshine’s Canal A, located along the east border of the Dells neighborhood, forms the District’s eastern border from Wiles Road to Sample Road. The remaining east border of the District from Sample Road to Royal Palm Blvd is the City of Coral Springs/City of Margate municipal boundary. Two narrow District right-of-ways containing Sunshine’s discharge canals extend southward connecting to South Florida Water Management District’s C-14 Canal. 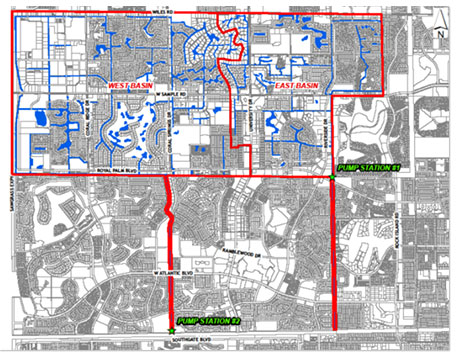 The Sunshine Water Control District is organized similar to other local governments in Florida, in that its governing body is composed of a three-member board known as the Board of Supervisors. The Board establishes the policy of the District in accordance with Florida law. The Board, by law, must hire a District Manager and District Counsel. The Board, through review of advertised Requests for Qualifications, ranks and selects a District Engineer to perform the engineering needs of the District. District Manager and the District Attorney administer the operations of the District and implement the Board's policies and contracts. Special Districts are not unlike other forms of local government, such as cities and counties, however, their powers are limited solely to the provision of specific infrastructure and services to a defined geographical area.

The Sunshine Water Control District, as suggested by its name, is charged with provision of infrastructure and services for the purpose of surface water control. The District's water control system consists of canals with approximately 500 acres of water surface conveying water flow from north to south and terminating at the C-14 Canal. The system also includes numerous culverts allowing for system connections and water passage under roads, structures and earthen obstacles.

During periods of high canal and ground water level, the system is designed to discharge excess water south into the C-14 Canal by a forced-flow method utilizing powerful pumps at two pump station locations. One pump station serves the West Basin of the District (the area approximately west of University Drive) and uses four electric powered water pumps that have a total capacity of discharging 210,000 gallons of water per minute. The other pump station serves the East Basin of the District (the area approximately east of University Drive) and also uses four electric water pumps that can discharge up to 151,300 gallons of water per minute. Each pump station incorporates a diesel engine/generator system to provide emergency power sufficient to operate all 4 pumps simultaneously. During periods of low ground water level in the East Basin, the South Florida Water Management District (SFWMD) permits the District to operate a groundwater recharge system installed at the East Basin Pump Station. This system allows water from the C-14 Canal to backflow into the East Basin to become recharge for the well fields operated by the City of Coral Springs. The amount of recharge is monitored by SFWMD not to exceed what is allowed under our permit.

To provide these services, the District utilizes a combination of its own field employees and contracts with third-party vendors as needed. The District Manager coordinates all of the facility, equipment, insurance and personnel related services and expenditures for the District.

Under Florida law, e-mail addresses are public records. If you do not want your e-mail address released in response to a public-records request, do not send electronic mail to this entity. Instead, contact this office by phone or in writing.

Skip back to navigation